The End of an Age

An eventful day yesterday. I shall begin at the beginning, or near there so.

I had plans for a productive day. Pick up a part to fix a friend's toilet, fix it, head back to my place for a while and read, have a friend over to read with for a while and then head to another friend's birthday party. it was a good plan, both productive and fun.
Slightly before noon the plan commenced. I headed to Canadian Tire to pick up a new toilet flush in my 1993 Chrysler Dynasty. While in the checkout line I also decided to buy three tennis balls for a roommate that wanted some to tumble dry something...apparent­ly tennis balls help in this process.
Following Canadian Tire I decided that I would go south across the Edmonton River Valley High Level bridge to a little cafe shop called Remedy to pick up a home brewed Chai Tea with soy milk for a friend.
On the way there i debated filling my near empty gas tank at what I think was an Esso station along the way. I decided not to...a good choice.
Arrived at Remedy, a longer line than expected but I would wait it out. Made my order, "Could I get a small Chai to go with soy milk". The girl taking orders informed me that soy milk in Chai was her favorite. I smiled politely and felt as if I knew something about ordering good specialty beverages, except this order wasn't for me, so in actuality... I don't.
Paid for the tea, didn't tip. I don't tip Tim Hortons people, so why would I tip Remedy people. This would come back to bite me.
After receiving my order I proceeded back to my car with Tea in hand. Got to my car and discovered that I had not closed the door all the way. I was unnecessarily nervous that someone could have taken something...such as my vintage tape deck and radio or the small wind up penguin that poops out little candies as it waddles.
Nothing was missing, and apparently no one wanted my car. And perhaps the cop that was parked just down the lot also deterred any would be thievers. I'm going with the prior supposition though.

Started the car up, and headed out. About 10 seconds into the drive I was confronted by a large SUV entering into the one way exit which I was trying to exit out of. I knew that my car could have fully taken the pest, but I decided that I would reverse back into the parking lot rather than making the SUV reverse back into the street. I found that the police don't really seem to mind people entering into one way lots either. No bother though, the one way'ness of the entrance wasn't well marked and no damage was done. So off I went again.

As I drove with the delicious aroma of Chai Tea drifting through my car I thought about how I was thankful to have this vehicle and the expanded possibilities it opened up for me. Such as being able to conveniently dodge to Canadian Tire or Remedy. No one could deny that this car was a chick magnet; and it provided the ability to be much more creative when trying to think of date possibilities. Yes, having a car was a very convenient thing indeed, I thought to myself. And should I have the money if this one broke down, I would perhaps get another.

Before long I arrived at my intended location and proceeded into the apartment. I handed the Chai tea off to its rightful owner and headed promptly to the bathroom, removed the porcelain toilet tank lid, rolled up my sleeves and got to work...for about twenty seconds. I realized that I did not have the strength in my hands to undo the plastic nut fastening the toilet flush to the toilet. And lo, though I will admit I was impressed by what a feminist tool kit does include, such as a flower printed hammer which unscrews into three screwdrivers and a powerful little electric drill, there was no such wrench as I had needed.

So as quick as I had come I had to go again. Deciding that it would be a quick drive back to my house only about 6 blocks away I left my coat in this apartment and headed out the door. In my house I quickly found what looked like appropriate tools and headed out again. I decided rather than lacing up my shoes that I would wear my thin cloth Toms on this excursion since it would be an in and out task.

Into the car and off I went. Left turn, down one block. Left turn, down one block, stop at stop sign. As I watch a truck pass by I ponder what it would be like to be hit by a vehicle while driving through an intersection. Then I continued on. Down two blocks, left turn. One block, right turn. Approximately four blocks away with no more stops signs I continue one. Down one block, down another. Slightly over one block away from my location I realize that the darker blue car driving down a perpendicular street is definitely not going to yield. I don't remember if I braked (which would have been useless on the unsalted roads of Edmonton). Regardless of whether either of us braked, as I passed through the intersection I discovered what it would be like to be hit going through an intersection. The other car slammed my drivers side at the front wheel, causing a decent indentation and my wheel to take on a significant slant as if a four ton man had climbed into the car and sat down.


Upon hitting my car the other immediately burst into flames. Fortunately the two individuals riding in the other car were not hurt as they were able to leap from their wreckage before the flames engulfed them.
Convinced that the accident was my fault they proceeded to yell and curse at me. As I denied my fault vehemently I noticed that one of the other individuals was definitely packing some serious heat and I could tell he was ready to roll. I dove over the Dynasty and proceeded to nab the .49 Springfield Jarren told me he kept fasted to the passenger side rocker underneath the car in case of emergencies. A mad gunfight erupted....

...and back to the real story.

Following the initial hit the other car then proceeded to swing and we side swiped each other, knocking off my rear bumper lights,.... and scratching their gas tank. I find this to be humorous.

No persons were harmed. We exited our vehicles, knowing I was not at fault helped to make it so I didn't feel like dirt. Though I did feel bad for my counterparts.
Accidents happen.
We exchanged information. I texted Abby and informed her that I may be a little late. Phoned the police and they said they would send the next available unit. Then, with no coat and in toms I, and we waited. My old landlord from the apartment I stayed in came out to see the accident, he didn't remember me but he lent me his coat. An appreciated gesture.

I was brought my own coat before long and several friends accompanied me and we sorted things out. Many other friends passed by (a college neighborhood), the news of this incident would not take long to spread I anticipated.

After about 40 minutes I phoned the police again. They informed me that there were no other calls on the list that day so the unit should be there soon. Another 10 or so minutes with other side stories passed by, we joked about the police taking extra time due to confusion over ordering with the new Tim Horton's cup sizes. Another half hour and they finally arrived. I had almost wished that i had told them that traffic was being blocked or there one of the cars was exploding.
But no matter, we talked with the police (they were friendly), filled out the reports. Called a tow, had some good conversation with a very friendly tow-man named John.  He informed that my car would likely be a write-off due to its age, I was not surprised.


After paying the towman I headed back to Abby's with wrench in pocket to fix the toilet.
Arrived, and got back to work. About 20 seconds in I discovered that I had not actually needed the wrench.
... Insert ironic and nervous laugh...
I also discovered that the "fits nearly all toilets" flush which I had purchased did not really fit this toilet. But I made it work, not pretty but who opens the toilet tank anyway. My job was completed at about 4:30pm.
I decided not to do any homework that day.
I think I'm going to get a hummer with the insurance money...or a red wagon.


I don't know how she did it... but I should have tipped the Remedy lady. 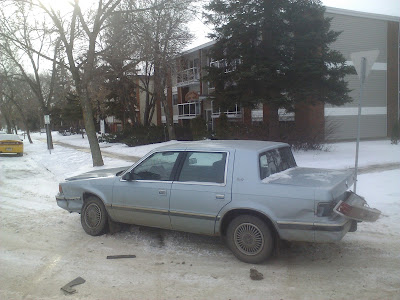 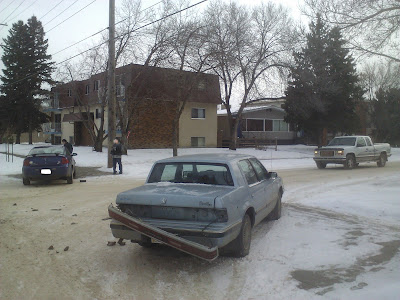 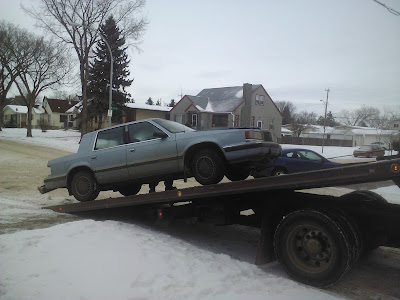 (Along with the Xia, Han and Jin, this Dynasty shall also now perhaps be mere, but epic, history)


But with all this said, God is good,
I have some awesome friends,
and there are some great strangers out there
...but don't forget... stranger danger is real.
I have been reminded of the importance of not growing attached to material things but to only attach ourselves fully to that which we cannot lose.
May only the loss of Christ have the ability to shatter our lives. In all else we must continue on with faith and praise. 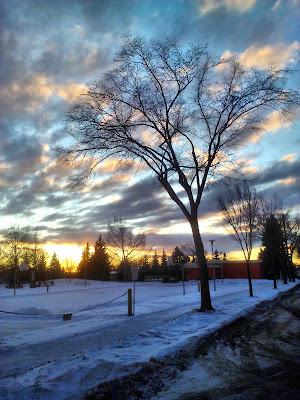