Nearly There, and the Brussels Endeavor

Location: Kigali, Rwanda
Time 8:10pm
After a full day of travelling I've safely made it into Kigali, Rwanda.
Haven't seen much of Africa yet as it was dark by the time I got here,
but one thing I do know already,
mosquitoes can find ways through the bed nets, somehow.
Too much maple syrup makes the blood sweet and the skeeters desperate to get to it.
I'll have learned my lesson.

God is good.
Tomorrow at about 5:30 am I will head back to the airport to catch my flight across Rwanda
and then meet up with my pastor and we will drive into Bukavu.
May my mind be on God and what He wants me to do.
I already feel a love for this place.
Probably commonly known as the honeymoon stage.
But I hope that a genuine, deep love for the people here will resonate in me.
I'm nearly there.

I suppose it is about time I explained what this was.
So for those of you who don't know, I was initially disappointed that my flight was not being routed through London, but rather through Brussels. "What's cool in Brussels?" I had originally thought.
However, Abby and her folks have been in Germany and the surrounding area for the past few days and the next week. Now a few nights back when Abby and I were talking we realized that where they are staying is only a bit over two hours away from the Brussels airport, where I was connecting through from Toronto to Rwanda. So we hatched a master plan to meet in the two hours between going realizing that in reality taking into consideration customs and security checks we may only get 10 minutes. But her parents were down for it anyway, which was pretty cool.
There were a number of worries from people though that border patrol would not allow connecting flight people out of the checked area.
There was also the chance that the airport be too busy and I not make it through to me connecting flight.
I got off the plane at 9pm, boarding for the next started at 9:50
But the risk had to be taken.
The endeavor had to be made.
So I arrived in Brussels, went intentionally to the wrong transfer area because I knew the right one would not allow you to exit the airport.
Well that's not entirely true, it was just a hunch, I didn't know for sure as you will see in a moment.
So I waited in line for a while, and when it was almost my turn I saw someone in a different line get told that for the Rwanda transfer they had to go to a different section.
So I said shucks, and hoping to save some time I jumped out of line and went to that section with a little hope there was an exit there. After walking around at the correct area I discovered that you could definitely not leave the checked area from that section, so then I went back down and got in line again.
I chose the female customs official hoping that she would be sympathetic to my story of hoping to meet my girlfriend in Brussels and let me into the country for a bit.
Perhaps a bit sexist...hopefully not.
But a stroke of bad luck came when, while there were other three people in front of me, this golf cart drives up with a few middle eastern people, the lady driving the cart butts in line, and then they take a long long time to get through. So I switch lines to this guy that I saw was smiling at everyone he let through. 'He's in a good mood" I thought. Unfortunately when there were only two people in front of my another golf cart drives up. Seeing that the previous cart was in the other line, this cart lady butts in front of the line that I had changed too. Frustrating to say the least. However the official recognized this and hurried them through quite well.
My turn came up.
The official told me that I needed to go to the other gate.
So I asked if it was possible to just go into Brussels in between my connections.
He told me I probably didn't have time to go into the city with the traffic and going through security again, so I explained I actually meant I just wanted to meet people in the airport.
And he let me through! So I got to see Abby for about 15 min and it was a great little time.
It was a little frustrating knowing that if I just stayed in line the first time I could have got an extra 20 min. But I am definitely just thankful for what did happen :)
A great little bonus as I had originally been quite disappointed that I wasn't flying through London.
Turns out Brussels had some great features about it.
And it did look pretty flying over too, so I would visit there for real one day.
Oh, and I made my connecting flight. 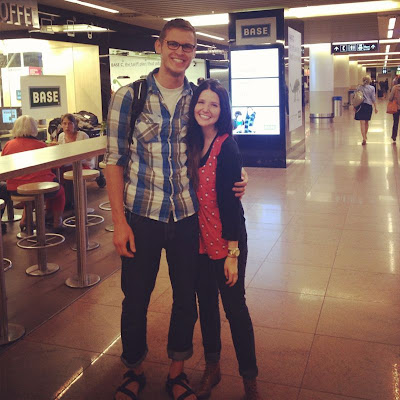 Blurry, but saying goodbye to a great family. This was actually taken from the me getting into the wrong border check line...again. But accidentally this time.

So a little story here. I had originally taken this photo because I thought it was funny that 'citizens' were all called 'burgers'. However it has another, less obvious point of interest. As I mentioned in the previous caption, as I was heading for my Rwanda flight after the visit I had accidentally went to the wrong border check. I was in a bit of a hurry by this time so it wasn't great to hear and I wasn't think too clear. So I got to the officer, he notified me of my mistake and indicated the direction to the correct border check for my departure.
I promptly made my way straight in the direction of that border check,
and straight into the plexiglass wall that you see there...hard.
In front of a lot of people...
However I had a good laugh about it,
as did many others.
And I was still laughing about it 30 minutes later,
as I'm sure many others were.
I just hope it doesn't show up on youtube,
and I hope Abby's parents didn't see it. 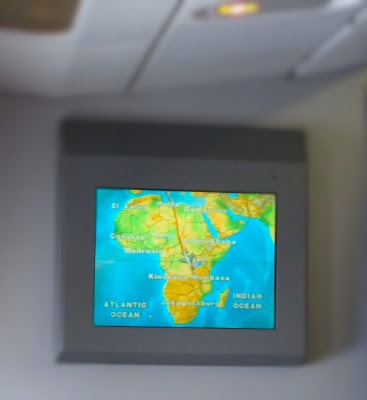 Over the DRC and into Rwanda.

And now, as I hear the noise of Kigali traffic and people buzzing outside my window,
I close off this post and hope for a good rest
and time of letting God shape my heart and mind for what is to come.
Posted by AndrewKlump at 12:31