Life goes on in the Congo,
though not without many disruptions, fears and struggles amidst the people.
There has been an increase in fighting in North Kivu lately involving the UN, Congo, Rwanda and Uganda. Over 200,000 people have been internally displaced from this recent conflict.
Also, many international political decisions have been made lately regarding the war in the Congo and the surrounding nation-states, including aid cuts from Rwanda by the U.S., Netherlands and England due to Rwanda's alleged involvement in supporting the rebel groups within the DRCongo.  If you are unaware of what is happening in this area of Africa I encourage you to read up on it. I think that few people realize the scale of deaths and horrors that have 'silently' been occurring for over a decade.

Even though Bukavu is relatively safe right now. There are still definite signs within the city that the country is not at rest. The amount of internally displaced peoples is huge here from both the regions around Bukavu, and we are also seeing more people coming over on the boat from the city of Goma on the north end of Lake Kivu, which is under threat of invasion by the rebel groups.

Here are a few sites  that can offer some information on the past and present occurrences within and around the Congo.


Here is a recent article from the BBC News Website:

"A mutiny by soldiers in the eastern DR Congo has turned into an international dispute,
with allegations that Rwanda is supporting the rebels.
The BBC's Gabriel Gatehouse reports from a lawless region where politics,
history and nature create a dangerous mix.
There is a saying in these parts: "Where logic ends, Congo begins."
It certainly feels like that as you wind your way through the picture-postcard lush green hills of Rwanda towards the border.
Here the roads are smooth and well maintained;
you drive past tidy little villages made up of immaculate red-brick houses,
with scrupulously tended front gardens.
The roadside is patrolled by armed officers, clad in high-visibility jackets.
Rwanda might be the Switzerland of Africa.
On the last Saturday of every month, the whole country gets together for something called Umuganda: a communal tidying-up exercise, complete with inspections of people's homes.

Nearly two decades after it was consumed in a spasm of genocidal hatred,
Rwanda projects itself as a country of logic, a country of control.
Then you hit the shores of Lake Kivu and the town of Goma
just inside the Democratic Republic of Congo.
It is beautiful, stunning countryside,
with the waters of the lake lapping against the shore
and hills receding into the bluish haze of the distance.
But the town is pervaded by a sense of nihilistic pointlessness.
Endless white UN four-by-fours bump their way over the pot-holed roads ferrying well-intentioned "internationals" between their bases and the headquarters of NGOs.
Swarms of motorbike-taxis also ply the crumbling streets;
perched precariously on the back are people scurrying about
trying desperately to make a buck or two in the frenetic atmosphere of the border town. 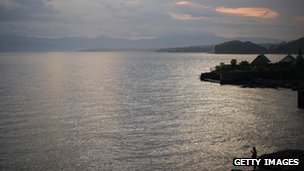 If the gasses at the bottom of Lake Kivu were to rise to the surface, Goma would suffocate.

Looming over all of this activity is Mount Nyiragongo.
The majestic volcano, which rises out of the jungle into the clouds,
last erupted a decade ago - it sent two rivers of molten rock running straight into town,
consuming whole neighbourhoods in flames.
From time to time, Nyiragongo belches and splutters,
as if to remind the people below of the futility of their endeavours.
Underneath the water too, there lurks a deadly threat.
Lake Kivu sits atop a vast reserve of methane and carbon dioxide.
These are valuable resources, and efforts are under way to try to tap into this energy source potentially worth as much as $20bn.
But seismic shifts or volcanic activity could cause what is known as a limnic eruption.
The gasses at the bottom of the lake would rise to the surface.
This invisible force would push all the oxygen out of the surrounding area. Goma would suffocate.

But the real threat here is not the unstoppable destructive forces of nature.
Rather, it is man's insatiable appetite for conflict.
The last big war in DR Congo started in 1998.
Also known as the Great African War, it sucked in at least six African nations and involved a couple of dozen armed groups.
More than five million people lost their lives. It officially ended in 2003… then again in 2008. This last rebellion is a small aftershock of that war.
Rwanda is accused of supporting the mutiny, a charge the government hotly denies.
But some of the Rwandan Hutus who orchestrated the genocide fled across the border into Congo in 1994. They are still active.
And so Kigali's logic has always been to exercise at least some control over the chaos on its border.

We spent a night in Virunga National Park, the centre of the latest fighting.

Mountain gorillas live in the Virunga National Park - a World Heritage Site
The head warden is a Belgian by the name of Emmanuel de Merode.
His struggle to protect the park and its population of mountain gorillas provides a small snapshot of the multitude of conflicts that plague the region.
On our way we had driven along a dirt track in search of a Congolese army colonel.
We never found him.


Instead we saw deserted villages, empty houses,
and the occasional group of soldiers roaming the countryside.
Mr de Merode took us up in his small aeroplane and flew us over the vastness of the park.
Here - he pointed - a plume of smoke rising into the air, was evidence of those Hutu rebels
- the former "genocidaires" - cutting down the forest for charcoal.
Other groups inhabit the slopes of the volcano, others still,
the plains where the elephants roam,
and yet others run a racket extorting money from illegal fishermen on the lake.
As we lay in our tents that night, the sounds of mortars
and heavy machine-gun fire mingled with the alarm calls of birds and primates.
The ground here is as fertile for flora and fauna as it is for armed groups.
They break up and reform, merge and split, sprouting an endless series of shifting alliances.
They are motivated by a mixture of economic interest and historical grievance.
Some are simply gangs of poachers or bandits.
Neither Mr de Merode, nor the UN peacekeepers,
nor even the Congolese army seems able to control them.
There is another saying about this part of the eastern DR Congo: