To Be Really There

Since returning from Uganda and a small second bound of sickness, I have been having a bit of a hard time getting connected again here. As a result of this I have found myself missing back home a bit more and longing for those people and places. However, as a reality check I have had to ask myself this question:


If I were to, for some reason or another,
have to depart from here tomorrow, would it be difficult to leave?

If the answer is no, then perhaps, as it has often been said, I was never really here.

"If its not difficult to say goodbye,
maybe you were never really there in the first place."

So I have found myself praying to be able to connect with life here again, to increase in love for the people, to find myself satiated in God's purpose which rises up within me in the form of that peace which surpasses understanding. The peace of knowing that, for some reason or another, this is where I am supposed to be.

I'm thankful that already opportunities have come up to do this. Yesterday (Sunday) I attended the first celebration for another wedding for some Congo friends here. This celebration centered around the giving of dowries from the groom's family to bride's. 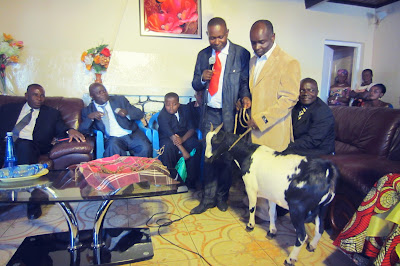 The basket you see on the table holds ten strands of rope. Each strand represents a cow.
Now, these days it is not necessarily always a literal giving of animals, rather, each cow may represent a certain amount of money such as $1000 or so depending on the wealth of the family.
Obviously there was a physical goat present as well, but I'm pretty sure that he was just slaughtered for the celebration about 20 minutes later
by the twobig women who picked him and carried him away.
Oh, and there was a chicken in the green bag which the young boy is holding.
I hadn't realized this until perhaps 30 minutes in when the chicken started to get a bit lively. 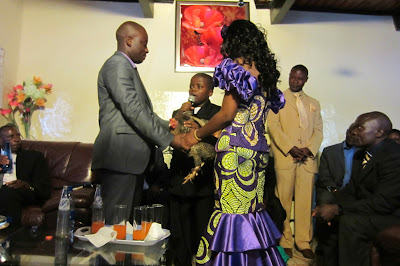 To the left is the groom, to the right is the bride.
In the center is the bride's younger brother,
and the chicken.
This was the moment where the bride's brother
was also agreeing to give his sister away to the groom and his family.

Later this week I will also attend their civil marriage before the government, and then on Saturday will be the church ceremony and following reception.

Also, today I began to visit the families and homes of some of my students. I will be doing this to or three times a week until my departure. I feel blessed to be able to have the time to get to know their lives a little better. To hear about their struggles, their dreams and to be able to pray for them and hopefully encourage them in their walks of life.

As we are in the middle of the dry season, a struggle that both families I visited today (though I only got pictures of one) mentioned was the search for water. I have definitely noticed recently the increase in people walking the streets with the yellow containers. In the morning, afternoon, evening. Heading to the lower areas of the city where there may be good water still. There is the lake as well, unfortunately however it hardly provides a clean source without a fair bit of treatment. 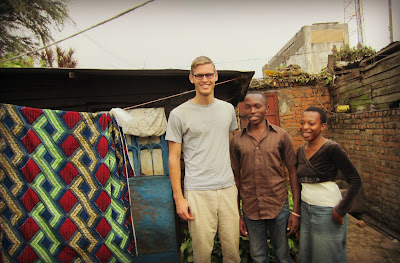 To the far right is one of my students, Koko.
In the middle is her brother who has also just recently started to attend classes. 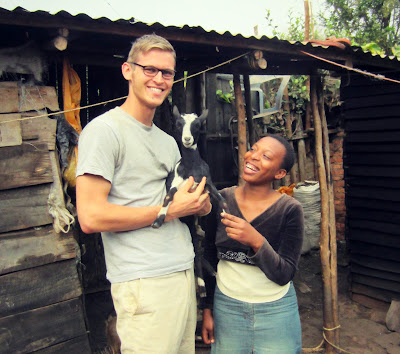 Koko and one of their goats.
If you can believe it they also live right in the city of Bukavu,
just a few minutes walk from my chuch.

Koko's brother is currently studying in post-secondary here in Bukavu. While she, after high school, hopes to study information technology. Another dream she says she has is to be a celebrity in theater/acting.

I'm definitely looking forward to more visitations and hearing about more of my student's lives. I'm continuing to trust God to draw my heart out a bit more. That a part of it may be planted in the soil here so that what I do and say may have a lasting impact in encouraging, edifying and empowering people. Above all I really do hope that people can see God in me. I don't really mind if people forget my name, my face, my words; as long as something in them, after meeting me, longs, a little more, for something more.