A little over a full week has passed now for me in the Congo.
And the electricity just went out sadly.
The internet is better this morning than its ever been, but no more!
Alas I will continue to type on my battery powered portable computer.

Yesterday after church and lunch I had English lessons.
With the bank machine not working for me I had no cash,
so when my friend Amos came to join me in traveling to the church,
I informed  himthat once again we needed to walk as we had the day before.
It is about a half hour walk and we had 25 minutes so I wasn't too worried,
especially knowing that only a few people would be there on the dot
and the majority would should up at about half past three.

However Amos, after receiving instructions from the Pastor,
was very concerned about arriving there on time.
I tried to reassure him that it would be fine,
but he insisted that we must not make others wait, we could not be late again.
So after walking about five minutes he decided that we should take moto-taxis.
I reminded him that I hadn't been able to withdraw any money to pay for a taxi,
so he offered the 50 cents needed (yes, I lacked even fifty cents to my name).
Thus, yesterday I had my first moto experience.
It was a somewhat harrowing experience, moreso than Thailand that's for sure.
There are less rules on the road here,
just try to keep to the right side when you can,
go as fast as possible, weave quickly,
honk when you pass, honk when you want to go faster,
honk to let pedestrians know you aren't going to stop for them,
honk to let possible passengers know that you will stop for them
honk at oncoming traffic even if you're in the wrong lane,
honk if you want a banana,
honk if you don't want a banana.
Okay I made up those last two.

All this to say I had a good time.

We arrived a few minutes, but still rushed into the church.
In the empty church. Amos suggested that we were perhaps late.
I assured him we were early. Around 3:10 people started to show up,
around 3:25 there were enough people to begin.
By 4:10 the class was full. As I expected.
Hakuna shida, no worries.
And hey, I got a moto ride!

Also yesterday after class I asked one of the missionaries at the guest house,
who will be leaving for a year in three weeks,
if there was anything I could help her with as she prepares to go.
Her response, "well yes, what do you know about steam engines."
"Not much." I replied, "but I can and figure things out. What do you need?"
She continued to show me this model steam engine that she had been given.
It would be used to teach kids at the school how a steam engine works,
only, it didn't work.
So my task would be to try and see what was wrong with it.
So we spent the evening tinkering with the engine,
teaching ourselves how it must work and what may be the problem. 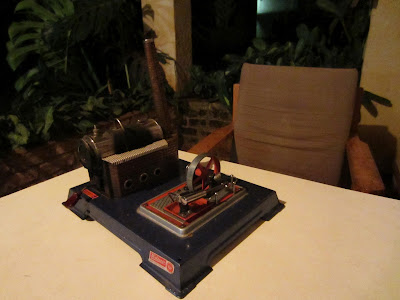 We deduced correctly the system. Light a fire underneath the containing cylinder, pre-filled with water. Boil water, steam travels through pipe from containing cylinder to the pump. Power should result in, after a manual push, the wheel being spun at a rapid pace, (and yes, we googled it afterwards). 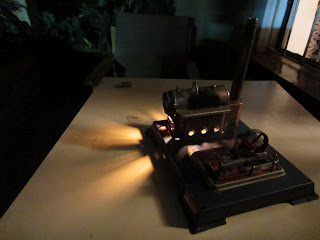 After realizing that each part seemed to be in working order we postulated that we were not  getting enough pressure due to lack of a long-enough burning fuel source to keep the water boiling. 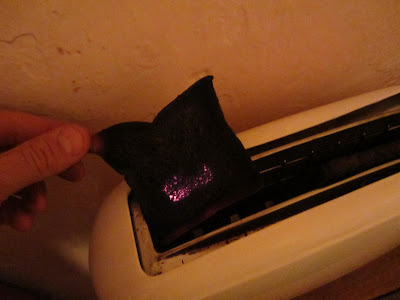 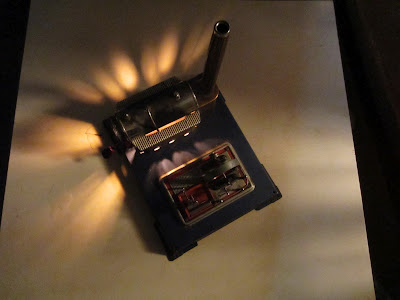 We are currently still working on finding an appropriate fuel source. I will update in the future if we get it running.
Posted by AndrewKlump at 10:03