It was a day of rhythm, music and celebration.
Sunday I attended my first ever African wedding.
The day began at 8:30, as I headed off to church for the regular service.
The service was shortened to two hours in lie of the wedding ceremony
which began at around 11am.
There was music, singing,
music, singing.
Dancing, preaching,
singing and music.
The ceremony ended around 1:30pm
and was followed by a small parade of Toyota Land Cruisers
and various other SUV's driving around the city
honking a, rough, but rhythmic beat.
The center focus being, of course, the vehicle decorated with ribbons
and bearing the bride and groom.

At 5:00 the reception began,
bearing many similarities to a Canadian reception,but with more music and dancing.

The reception ended around 8:00 with a TIGHT circle dancing around the bride, groom,
best man and maid of honor. It was an honor and a blast to be a part of the celebration.
Though you will note that in none of the pictures neither the bride nor groom are smiling.
I asked someone about this, but they didn't know why.
I do imagine that your jaw would get quite tired given the length of  the celebrations
if you were smiling before everyone the whole time.  Perhaps...

Following the reception I joined the Pastor and his family
as they visited a church member in the hospital.
A young fellow suffering from pretty severe malaria.
A reminder that amidst celebration
there is pain occurring at the same time.
But the existence of pain, brokenness and sickness,
does not mean that we should cease to celebrate the good things.

Here be some photos of the event.

The Ceremony at the church. In Congo they have a civil wedding for the government, which was on the Friday. On Saturday was the giving of dowries. And Sunday was the church ceremony and following reception. The choir in the back is in pink, yellow and blue floral pattern, the colors chosen by the marriage partners. 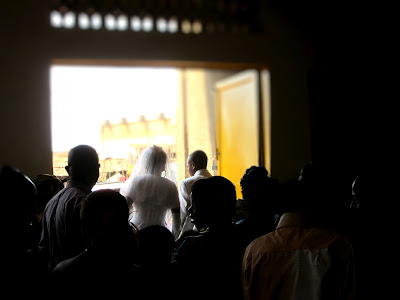 The entry of the family and wedding party. 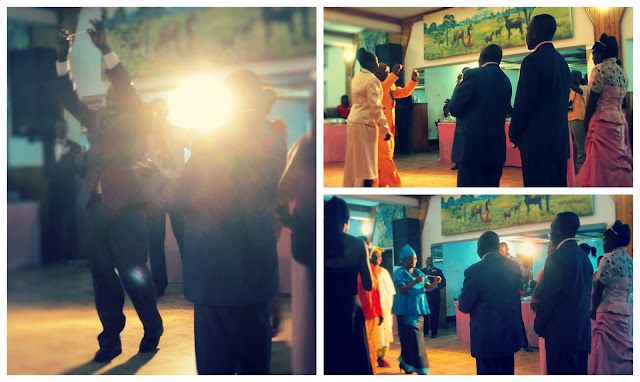 Gift giving time. When the first people came up with the bracelet I thought: "Oh, that's a nice gift, they made a bracelet for the couple." I was soon informed that the banana-leaves woven into the rope symbolized either the gift of a goat or cow. The top right one is a cow, the other two are goats. I missed one goat, because I thought it was just rope. 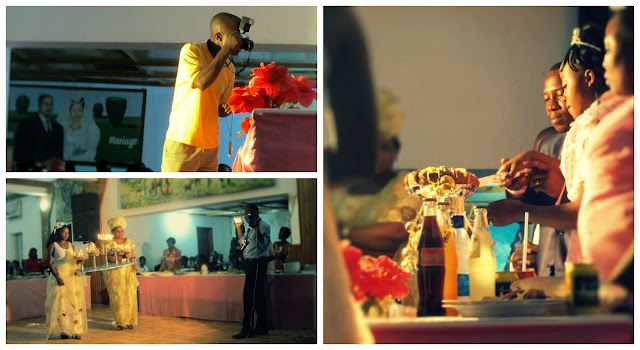 The presentation and cutting of the cake. It didn't stretch to feed everyone (maybe 200 guests, the Pastor said some receptions may host up to 800) but they got it quite far. 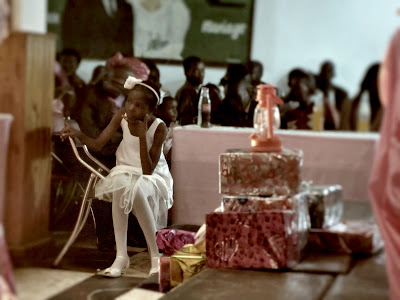 A 'flower girl' and some of the gifts laid out before the head table. 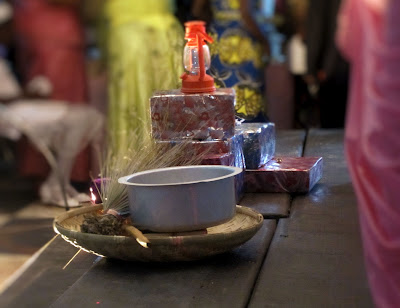 A few of the traditional gifts: rice sifter, broom, bowl and wooden spoon.  I wasn't able to upload the video, but each traditional gift was presented with a dance demonstrating the use of each, whether sifting, sweeping or stirring.